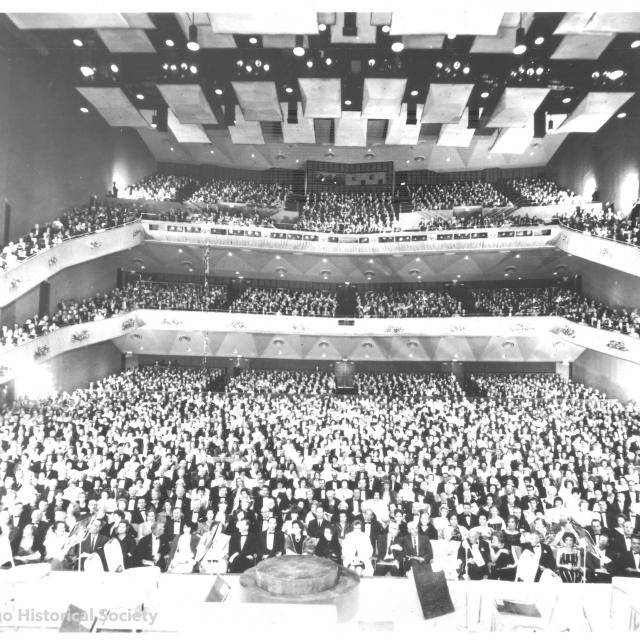 The San Diego Civic Theatre hosted not one, but two, birthday commemorations with a live audience on Sunday, January 12, 2020.

During the final two performances of "Dear Evan Hansen," presented by Broadway San Diego, the staff of the San Diego Theatres led patrons through a rendition of "Happy Birthday" at the conclusion of the 1pm and 6:30pm performances.

The audience, estimated at just over 4,500 for both shows combined, also "posed" for a photo from their seats. The photo was designed to recapture the image that marked the opening night crowd on January 12, 1965.

In 1965, the venue's opening performance featured the San Diego Symphony with soloists Dorothy Kirsten and Brian Sullivan. The evening’s activities featured opening comments by then Mayor Morley Golden and J. Dallas Clark, with the San Diego Opera Guild and the San Diego Symphony serving as co-hosts. Guests were dressed to the nines, with headlines from the then Evening Tribune reading, "Civic Theatre, Crowd Glitter at Grand Opening."

The Civic Theatre is an architectural icon, designed by Lloyd Ruocco, Selden B. Kennedy Jr., and William F. Rosser as the city's first performing arts venue.

Today, the Civic is managed and operated by San Diego Theatres, a 501c3 non-profit organization, that also manages the historic Balboa Theatre.

Thank you for celebrating our 55 year milestone! 🥳 Nothing better than singing happy birthday with the cast of #DearEvanHansen and 2,000+ of our closest friends. 🎉🎉🎉 #civic55 pic.twitter.com/GXASuMFxUs

Over the past five decades, the Civic Theatre has hosted many of the world’s greatest talents in fields of opera, classical music, orchestras, dance, comedians, contemporary music, and Broadway. Celebrities who have graced the stage include Beverly Sills, Frank Sinatra, Johnny Cash, Bob Hope, Jerry Seinfeld, Diana Ross and Maya Angelou. The Civic Theatre has been the home stage for Broadway San Diego since 1986.

"As stewards of both the Civic Theatre and the Balboa Theatre, we operate these venues on behalf of the City of San Diego to make performing arts accessible to all San Diegans," said Board Chair Jim Waring. "Our staff has a deep passion for the arts and provides our clients with a welcoming environment that fosters excellence in presentations."

Here are some fun facts about the venue: